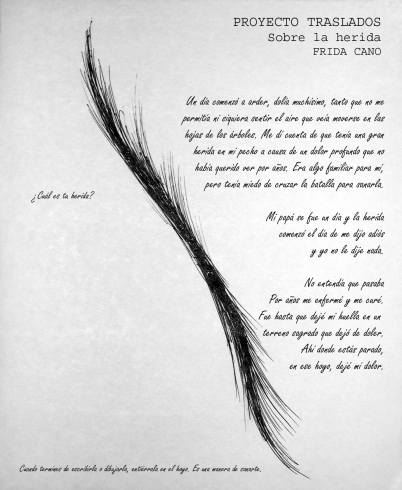 As part of the artistic residency from Proyecto Traslados, I created a series of works that addressed a personal issue I dealt with ever since my dad left home. A wound in my chest appeared and in difficult moments, it hurt and burn very much. I decided to leave my pain behind by healing it through land art interventions. I dig the dry ground with the shape of my wound in Yahuiche, Oaxaca; I drew my pain in the sand of San Agustinillo’s beach; and finally, I opened a crack in the asphalt in a street next to my dad’s house. In every location, the climate helped heal the wound, slow or fast, with rain or with salt: the pain went away. As a closure, I invited local inhabitants from Yahuiche to write and burn their soul injuries; the ashes were buried at Yahuiche’s wound. In the end, all of the wounds were healed.

After several months of finishing the three phases, kids were invited to also write a letter about sad experiences and burn them in the same hole that I originally dig in San Jerónimo Yahuiche, Oaxaca.

Once the project was done, I collected all the documentation I had in an artist’s book, closing the injury that motivated me to talk about my pain. The injury was healed, and a new series of “traslados” (movements, travels) began for me.