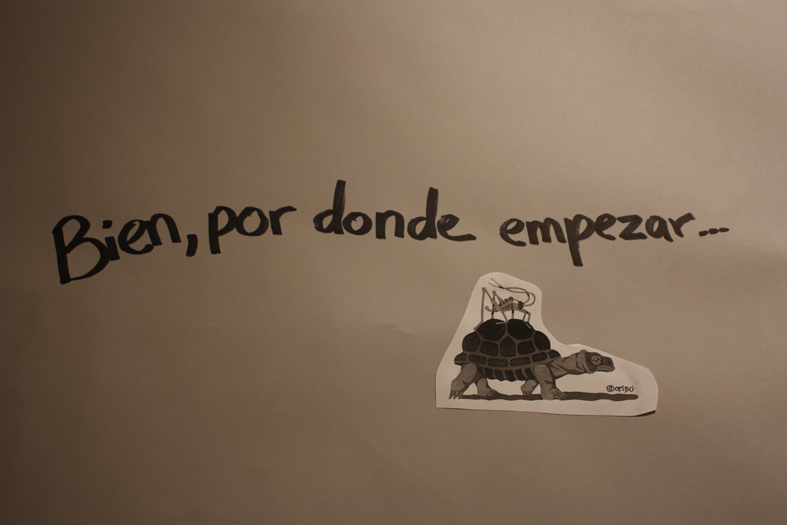 Writing and drawing has always been an important aspect of my creative process. As a little girl, I started writing stories in my notebooks, the stories I couldn’t find in the many fairy tales that my mom read to me and my sister every day. I’ve been collecting ideas, short novels, screenplays, drawings, and various things in my diaries, journals, and albums. Even today, I need to carry with me a notebook and a pen in order to give shape to thoughts, concerns, doubts, and hopes.

Cocolo Show, drawing and photography (Click on the image to see an animation from the original book)

I tell the story of an uncle who was an actor at the carpas in Mexico City. He was considered greater than Tin Tan and Cantinflas, but his addiction to alcohol, parties and women undermined his acting career. The story is based on true facts and it contains some freaky extra anecdotes. This book was presented at the Feria Internacional de Libros de Artista / Centro de la Imagen 2011. Slovakian artist Magda Stanová owns the original book.

Hijos de Teresa, drawing and photocopy (Click on the image to see an animation from the original book)

Combining faces from a photo and freaky-style drawing, I make the story of my uncles (Teresita’s sons) as if they were part of a freak show. I picture them as a magician, as the lizzard-man, the freak that comes out from a hat, the leggless man, and the strong guy. Today they all entertain me even though they died before I was born.

Abuelas, photocopy and drawing (Click on the image to see an animation from the original book)

My grandmas Sofá and Bo never liked each other. Sofá was a lazy-leader, and Bo was a hard-worker but subjugated. This is the only picture in which both appear smiling as friends, sitting next to each other –even touching arms. Freaky as it is, opposites attract each other like magnets, as if they were one single person.

En la mesa, photocopy and drawing (Click on the image to see an animation from the original book)

While eating at the table with the family, people transform into freaks: some chew with their mouth open, some eat just with their hands, others smile with food stuck in their teeth… they become someone else.

Hermanastros, photocopy and collage on paper (Click on the image to see an animation from the original book)

Stepbrothers (two of my uncles) have different personalities. When they were kids they never understood why they had the same age. For years, one thought of exterminating the other. The story I tell is a creative approach to their anger and frustrations during their adolescent years.

You are my sky, You are my limit, inkjet (Click on the image to see an animation from the original book)

I photographed myself looking at the sky, so when a reader scan through the book, s/he would feel like my sky, paraphrasing a well-known saying. This book directly refers to the idea of a Self-Portrait of Influences, the notion by which I consider that I am shaped by the Other. The book was presented at the Biennial of Contemporary Art in Fukushima, Japan 2006.

Album, inkjet and drawing (Click on the image to see more pictures from the original book)

A compilation of my granda’s, my mom’s and my own pictures. I created this book with the aim of recalling facts and anecdotes.

This book is to me like a self-portrait. It depicts my life since the first picture someone took me until the last one before presenting this book in an art show. Currently, I’ve made two of these anecdotic books due to the fact that I find different images and take new ones. My memory is shaped by the anecdotes written on the back of the photos.

Para mi Bo, inkjet (Click on the image to see more images of the original book)

When my grandma Bo was sick, I made her this book. It contains several photographic images that are linked with some other personal anecdotes. Both intertwine in order to create a liminal space between fantasy and reality. The book begins with the first picture I remember, my first memory in life. I recall smiling to the photographer when he took the picture; my Bo was next to him saying “Smile, see, like this!” However, while making the book, I discovered that my grandma was behind me in the photo.

I recently made this book because I was confused about working two disciplines: curator and artist. This book was more like a journal in which I depicted my honest thoughts, questioning my own inquiries, and mixing artistic with curatorial materials. Why questioning when the answer is my smile? (Regardless discipline or techniques.)